what is down syndrome? 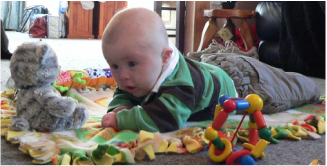 Down syndrome is a genetic condition that occurs as a result of an extra chromosome. It is not an illness or disease.

Down syndrome was first described in detail by an English doctor, John Langdon Down, in 1866 (hence the name). While the common characteristics of people with Down syndrome were described in the 19th century it wasn’t until 1959 that a French doctor, named Jerome Lejeune, discovered that Down syndrome was caused by the inheritance of an extra copy of a chromosome. It affects 1 out of every 800 to 1,000 babies born.

We do not know why Down syndrome happens. We know it occurs at conception and it can happen to anyone no matter what ethnic, social or age group of the parents.  We also know that it is not caused by anything the parents may have done before or during pregnancy.

Down syndrome is usually recognisable at birth. People with Down syndrome do have features in common and doctors and medical specialists will look at these as an indicator.  A diagnosis is confirmed however by a blood test where a specialist takes a look at your baby’s chromosomes under the microscope and confirms if there is an extra copy of chromosome 21.

Even though your babies' features will have similarities with other people with Down syndrome your baby will also resemble you, your family and his/her brothers and sisters. While there are many characteristics common to people with Down syndrome your baby is an individual, with a unique appearance, personality and a set of abilities. At first the label “Down syndrome” will seem larger than your baby but as your baby grows and develops and reaches the milestones at his or her own pace his or her personality traits will become more pronounced and soon you just see your baby more as the individual he or she is.

For further general information and reading about Down syndrome go to:

Upside of Down Community community.upsideofdown.co.nz